Out with the old and in with the new!
San has a new design!

Yeap, we changed how he looks, how he animates and even how he interacts with the environment and his spear. After an exhausting design and review process we ended up with a cool new version of our main character. 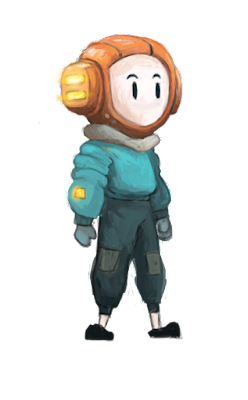 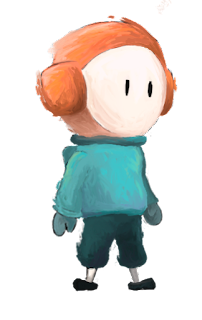 Of course the change wasn't done just like THAT. There were tons of studies done, TONS!

So, the focus for the new designs was to try and find a more likable and relatable character while also improving upon the original design. We also needed to give more emphasis in to the character movements and the way he can express himself so we started heading towards a slightly taller character, testing new forms, colors and other options for his eyes.


We were all a bit worried when trying to change the character into something new as everyone in the team got attached to the "old" San. But the future is here... or there... it's somewhere, I guess. So there... or here?

That's it! We are really happy with the new design and the team is happily working on a lot of other things that we can't wait to show you. Mainly how the new San is animated! We will show it on our next blog post.

Don't forget to follow Out of Line on Twitter on take a bigger leap of faith and follow some of the team's personal Twitter accounts (we are not responsible for what you find there).

Get the point, double joint?

Posted by Filipe Duarte Pina at 09:29 No comments:

So the holidays are now in the past and the new decade is here.
The team took some time to get ready for 2020 and also to shift gears into maximum warp as we start this new year at full throttle (yeap, lot's of car parts metaphors in this one, also, a Start Trek one).

So to keep the holidays spirit intact and bring the joy and happiness that only exists when you spend time with your family (or not), here are some photos and quotes from all our Out of Line team members.

Having said that, you may notice that we are getting bigger! Some new (and old) team members have join (or rejoined) the team. Also, a few of them never actually left and kind of hang around backing the team and waiting for the right moment to step in. But this is a story for another post... maybe.

Francisco says:
"I went in to the cold of Dublin to spend my year's end.
And, in the middle of all that Guinness, I took the opportunity to visit an interactive museum about the vikings and Dublin's medieval era. There I could try out replicas of gear worn in those days.
It's funny to think that swimming caps have evolved so much!"

You think you are so clever and funny, Francis. But you aren't. At least now we can smash you with a pipe in the head and you won't feel a thing. GET BACK TO WORK!

"It was a good holiday break.
Between spending time with family and friends for Christmas and new year I also went to West Elizabeth to work for a few days on a family ranch.
This is me on a break after feeding the chickens and going for a horse ride."

Our programmer thinks he can trick us by doing some Photoshop magic and bashing a real photo with a photo of his head. BUT HE CAN'T. We can totally see this is fake! Nice try though. NOW, GET BACK TO WORK!

Diogo was yet again late at sending his photo and comment so...

"This year the holidays were a time to enjoy family, relax and plan the new year (and the new projects ahead).
I had a great family Christmas, full with cheese, ham, good regional wine and that typical "too much food" Portuguese table, but it was particularly special because it was our puppy's first Christmas: behold Tyr, The Lawgiver!"


Mafalda sent us a photo of her dog in a bed wearing fake antlers. Not only is the photo in a vertical super slim fashion (causing terrible design anxiety to everyone) but is she really expecting us to believe that she would own such a cute pup? I don't think so. Stealing photos from other people is horrible and you should know better! NOW, GET BACK TO WORK!


Filipe says:
"Got a lot of really cool presents, but these sleepers that my wife gave me are really something else. I love Rick and Morty and actually owning such a silly thing as these oversized things just warms my heart, and my feet! Hahahaha!

This is horrible! You are happy because you got presents? Your family is not that important, huh? Also you are wearing sleepers shaped like the heads of two characters, does this mean your feet are constantly inside their bodies? ARGH! YUCK! ...GET BACK TO WORK!

Another team member who thinks we can't spot the terrible Photoshop mash-up. Listen, WE KNOW YOU ARE NOT A MOUSE. Now, stop this nonsense and go do your job...
...wait
...that's not right.
...AH! GET BACK TO WORK!

Really? How nice of you, Barna.
If you don't mind, would you please continue your work related affairs?
Thank you.


Happy holidays from the team!
Don't forget to follow us on Twitter!
Make it snappy, Pappy.
Posted by Out of Line team at 10:16 No comments: